As you know, Polie was sacked as my body guard because he did a bad job. Daisy told him, "You're Fired!" in her best Donald Trump voice. He hasn't spoken to me since, I don't know why.

Anyway, I have noticed that Salvador does a good job of avoiding the flashy beast in our house. Yesterday when he had just woken up from a nap (and therefore wasn't awake enough to try and hit me), I asked him how he did it. (We all know painting him black was a miserable failure)

He said that I needed to camouflage myself, like he does out in the garden. I asked him how he hid himself in our pathetic garden, and he asked me if I had ever seen him in there. I said no, of course, because I haven't. He said it was all due to camouflage. So I gave it my best shot next time I saw mum with the flashy beast. 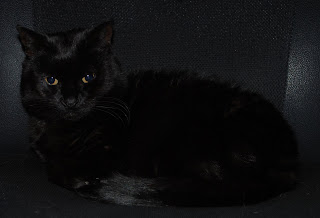 Do you think it worked?
Written by Teddy Westlife at 9:26 AM

hmm my dad is good at that camouflage stuff. I will have mom email him (he is in iraq right now) and ask him for some tips for you.

You are getting better at hide and seek. More hiding and less seeking should do the trick!

You are doing a great job of looking invisible!!!!

The Kitty-Kats went to the woods today but I don't think we were hiding from anyone.Come to our blog and check us out!
Mama, MrSippi and Carolina

Very clever! That picture is actually very cool and artistic. The pupparazzi probably like that. Maybe Shelby's dad can help, or maybe you could consider wearing a disguise.

You're doing a great job at hiding. We almost couldn't find you

I was really expecting to see you wearing full camo gear.

In my best Joe Peshi voice "Yeah You blend"

Haffle, where did you go? Huffle??

All I see is a black square....wait..no..oh! There you are, Huffle-that's pretty good!

oh yeah, that is great camouflage! i had to squint to find you! it would be cool if a soft bitey mouse strolled by while you were hiding. then it would be totally surprised when you pounced on it!

Oh Huffle, that is some most excellent camouflage! All I can see is your beautiful golden eyes.

ps: I hope I was not too harsh on Polie!

I can barely see you! Great job!

Nice job of blending in.

Mom says I can come visit you while she is away in California in another week, so get ready!

I can't see you anywhere! I need my spectacles!

Hi, Huffle! I came ofur fur Mr. Hendrix's blog to see who you is. Dat's pretty good camoflage, but you mite wanna close yur eyes. As soon as I see Mom's flashy box, I squint my eyes shut or stop what I's doin.

You got lotsa Husky shtuff on yur blog. My vet says I's part Husky cuz I carry my tail curled up ofur my back. You fink dat's possible?

Hahahahaha!!! That is a great job of camouflage!!!
Sometimes I close my eyes so Mom can't see mee,heehee It drives her nuts!!!!!!
Purrs Mickey