Firstly, I would like to say congratulations to every single cat, dog and hamster who entered Competitive Napping.  It was one of the biggest events of the Games, and truly you are all winners.

But, our independent judges have made their decisions. 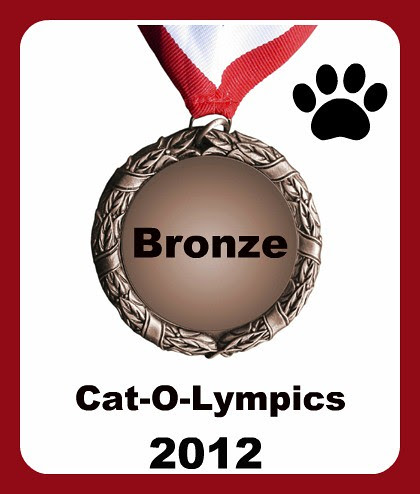 The Bronze medal is awarded to: Genji Chan!  The judges said they spent a lot of time looking at the photo and couldn't tell where Genji stopped or started.  Congratulations Genji! 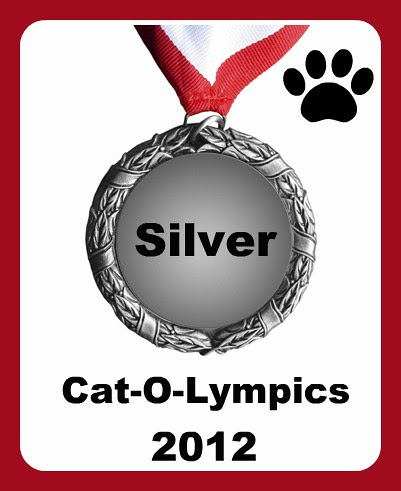 The Silver medal is awarded to: Tater Tot! Our judges said it was the look on Tater Tot's face that sealed the deal. Well done Tater Tot! 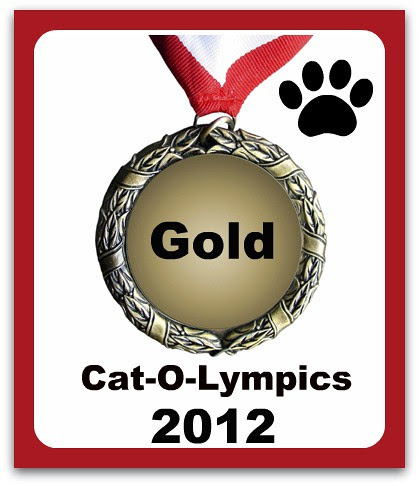 And finally, the gold medallist for Competitive Napping in 2012 is: Mr Darcy! What the judges want to know is, did you eat the mouse that was attached to that laptop? Congratulations Mr Darcy!

I also want to say thank you to everyone who submitted a photo. There are some very creative nappers out there in the Blogosphere. I'd also like to thank the judges, who could not be bribed in any way even though I tried. Thanks to my mum for putting together the posts for last week - it was a very big job. And finally, thank you to everyone who hosted an event during these Olympics. It was even bigger than 2010 and now I think I shall sleep until it's time for the Winter Games in 2014.
Written by Teddy Westlife at 7:00 AM

Congrats to the winners!!! And to all the contestants - what a great group! Everyone was so inspiring!
Well done, Huffle! And the judges.
Play bows,
Zim

Congratulations to the winners and well done to all involved!

Well done, You! For Huffle, Mom and the impartial judges you should get a medal of your very own!

Well done, You! For Huffle, Mom and the impartial judges you should get a medal of your very own!

Congratulations to all the winning Nappers!

Well done, all! That qas quite a BIG event, although me thinks many slepy through much of it. More's the pity.

great event, Huffle! concats to the winners and all of the competitors!

Concats to the medal winners, and to the organisers for a great event.

Concats to the winners. We wish their pictures were posted along side their medals, so we could find them easily :)

ConCATs to the winners! All of them were great.

Big concats to the winners...Mr. Darcy rocks the nap!

Figaro and my momma Ellie are back in training...zzzzzzzzzzzzzz.

ConCatulations to all of the winners!! We really think these O-Lympics were fantastic!!

The Florida Furkids and Lexi

Congratulations to the medal winners! And good job, judges. We know that this was no easy feat for them! All the competitors are excellent snoozers!!

We sure enjoyed the Cat-O-Lympics this time. We are having fun hosting our event...synchronized snoozing...medals will be awarded August 9!!

Alasandra, The Cats and Dogs said...

Congrats to all the winners, we are going back to sleep now.

Mom says I could have won this as I nap all the time.We are back here is our new blog address
http://talkwithariel.blogspot.com

Andrea and the Celestial Kitties said...

Congratulations to the winners! That was a fun event!

Congratulations to all of the winners. There were some excellent entries.

You probably couldn't tell from all of the floof, but Brulee's back feet were up against her chin in her entry.

Concatulations to the medal winners and to all those who took part :)xx

Woo Hoo! WOO HOOOOOOOOO! I got a medal!!!!! I am so proud and humbled and just outright delighted. Thanks, Huffle and Co! And Thanks to the judges also for not being able to figure out where I stopped or started!

Congrats to all the Medal winners! Bet your mom is ready for a nice long nap herself!

ConCATulation to all the medal winners !!!

Concats everyone!! Even though Zoey did not win, she is napping and has no clue... Apparently she is busy training for 2016!!

We had to chekc out the other posts and spent ages trying to decide. They're all wonderful! And a rabbit joining in made it all the more fun. MEOW to all of you!

Well done to all the winners!

Holy molies, congrats to all the nappers, for you all has amazings. I is so proud of my cousin Tater! It is the only event she entered in the Olympicals; I will has to make sure she trains really really hard for the next one!

Congrats to all the winners!

I can't find Tater Tot's winning photo and we'd love to see it. I'm sure its there, I'll keep looking, but could you feature it next to the gold medal?

wow, how amazing to be a winner! AND GOLD! We are thrilled for our Mr Darcy who is not feeling modest at all but jubilant and excited! THANK YOU dear Judges but especially dear Huffle for all the arranging! Love Mr Darcy and his supporters Helen and Mr Bingley xxxxx