And the winners are...

Welcome to the medal ceremony for Competitive Napping in the Cat-O-Lympics! It's been a pretty exciting week of competition, I must say. Before we go on, I'd like to thank Fin for hosting the Cat-O-Lympics in the first place, to Glogirly (Katie's human) for making the medals, and to every single kitty and pup who entered the competition. Every one of you did a marvellous job and it was extremely difficult for the judges to make a final decision.

As we saw yesterday, Paddy took out the People's Choice award for that truly amazing Treestyle Napping photo. Congratulations once again Paddy. Now, the medallists.

I have awarded medals in two categories. The first category is general napping and there were a lot of amazing entries in this field.

The second category is "sleeping where you're not meant to". This was optional and I had some very impressive entries in this category too. I'm going to call this the "naughty" category.

The general bronze medal winner, for demonstrating that sleeping with your head down the stairs is comfortable, is Jack-a-Roo from Cybersibes. Congratulations Jack! 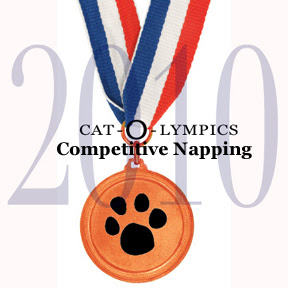 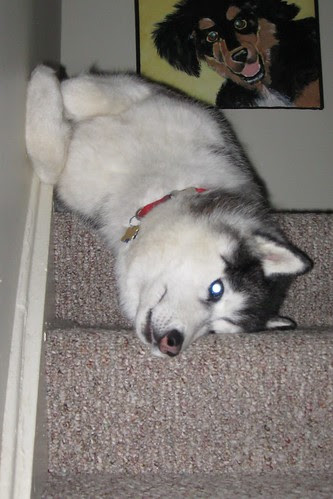 The naughty bronze medal winner is Drill Sgt Zim of the Army of Four. He wages an almost daily battle with his mum over being allowed to nap on the Sitzbank. Well done Zim! 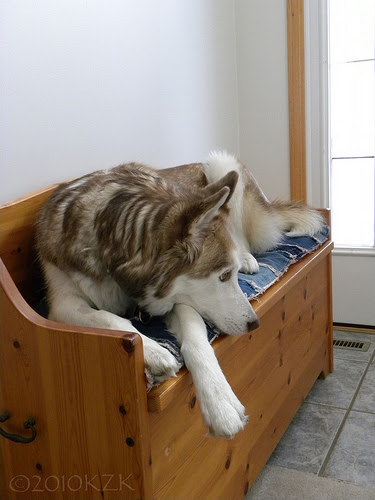 Wear your medals with pride!

The general silver medal winner, for managing to sleep while sitting upright, is Shadow from Meow Family. Well done Shadow! 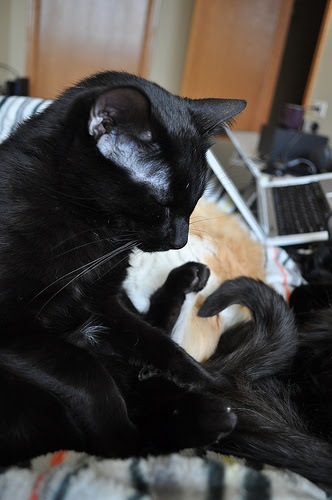 The naughty silver medal winner is Derry from Fuzzy Tails. Not to be thwarted by his mum's attempts to stop him from sleeping in the pot by putting chicken wire over it, Derry ignores the discomfort and carries on! You make me proud, Derry! 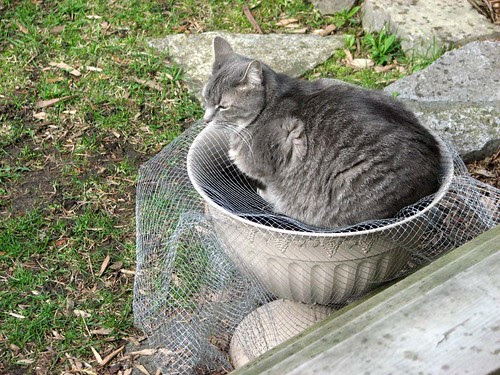 The general gold medal winner, for what has to be the most dramatic sleeping pose we've ever seen, is Tuna from Kitty Stampede. 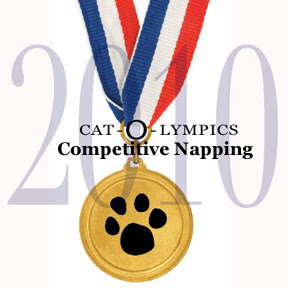 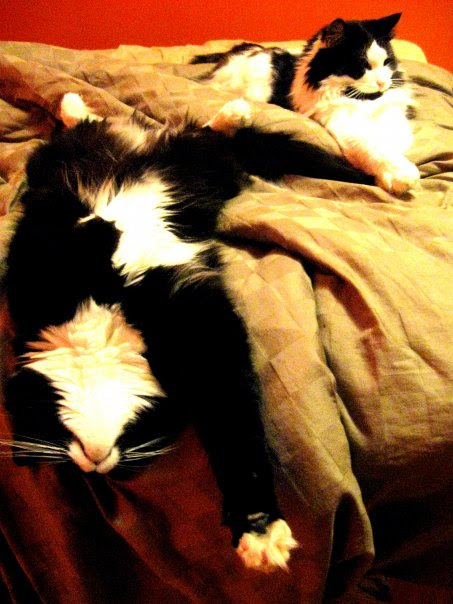 Congratulations Tuna, you beat out some wonderful competition to win the gold.

And the naughty gold medal winner, for being the naughtiest kitty to strike a napping pose anywhere in the world, is Snafu from Cat of Nine Tails. 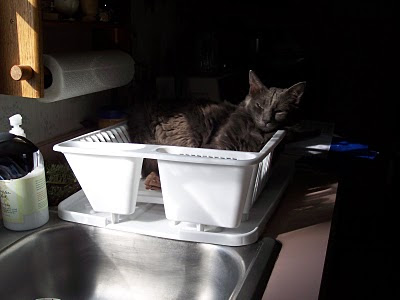 I'm so proud of you, I could burst, Snafu! Enjoy your gold medal!

Once again, thank you to every single pup and kitty who entered. I would have liked to give a medal to everyone who competed, so I hope you've all collected your participation badge at the very least! 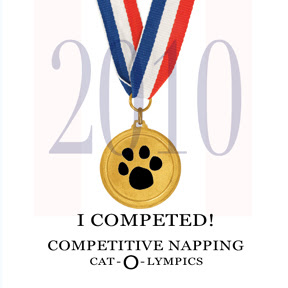 Mum says we are having Monday off to recover from this massive event, so I'll see you back for regular Huffle Mawson programming on Tuesday! Well done everycat and everydog.
Written by Teddy Westlife at 4:00 PM

Great Winners!!!! Concatulations everyone you were great competitors!

Concats and Condawgs to the winners! Excellent entries all!! And thanks again for all your hard work Huffle and Mom!!

Those are just great winners and that was such a tough competition...You did a wonderful job Huffle!!...Hope you get enough rest after all that work; see you on Tuesday!...xo...Calle, Halle, Sukki

Well done Miss Huffle-buff... we know how much work this has been, you did an awesome job! Now c'mere for some smoochies...

Congratulations to the Winners!
I love Tuna's entry!
You and your mom did a pawesome job!
Thanks a lot!
Have a nice and relaxing break!
Kisses and hugs
Lorenza

You deserve a day off Huffle, and I suppose your Ma does too...

You'll be exhausted! What a tough competition to judge!

Cool! Congratulations to the winners! Thank you to you and your mom for all your hard work in this competition!

Hey Huffle,
Outstanding selections by the judges. Thanks to you and mum for undertaking this herculean effort. It brought out a lot of talent and the contestant photos were outstanding.
- TBH&K

Concatulations to all the winners! What a fantastic event this was! Absolutely thrilling! :-D

All the competitors were, indeed, the finest "athletes" in their respective fields! ;-)

Thanks to HM and everyone who organized the event. Can't wait for the next Cat-O-lympics! :-D

(FYI - I covered the results over on NodOff.)

Fantastic choices - they are excellent photos and I don't know how you narrowed it down.
Congratulations to the winners and well done to all competitors.....

These are great choices and you did a wonderful job with this comeptition, Huffle.

Concatulations to the medallists, to the wonderful entries, and to you Huffle for running such a fun contest. It was one of our favourites of the CatOlympics.
Enjoy your rest day:)

Congratulations to all the Medalists, competitors and YOU, Huffle! We just can't imagine how you narrowed that down to 3 in each category. Fabublous!

You did an absolutely amazing job organising this, Huffle. Thank you!

We didn't realize there were more awards, we thought the People's Choice was it. So our human was especially surprised to Derry win silver in the naughty napping category. Wow, thank you!

Congratulations to all the medal winners--and to everyone who competed, because all the entries were fantastic.

And a huge thank you to Huffle and her mom, who put so much hard work into this. Bravo!

So many wonderful winners. Congratulations to all of them. And we have to say: Snafu is such a worthy winner of the naughty gold medal.

Concats to all the medal winners

Everyone was great! I've got some new ideas on sleeping from all of the winners and participants.

Congratulashuns to all the worthy winners!

ConCatulations to all of the winners! The competition was stiff, you deserve a rest.

Sniffie and the Florida Furkids

Congrats to all the winners! And to every pup & kit who pawticipated! And thank woo Huffle! My very first bronze medal! It's been an honor to represent my breed in a competition with such talented competitors!

Congratulations to all the winners!! Those are some amazing sleeping positions!!!

And good job Huffle and your mom!! We know how much hard work you put into hosting this event and how difficult it was to pick the medalists! You deserve that day off!!

Tuna is so funny! :):):)Congratulations everyone! Very thrilling contest, Huffle!

It was a very tough competition, and the winners sure deserve their medals. We will continue to train diligently in order to compete in next year's competition. Off to practice!

Congrats to all your winners AND participants, Huffle!! And you and Mum did a great job. We were very happy to see two of our sibe pals win too although it is very hard for us to see how anything we do could be naughty.

Congrats to all the winners! And thanks to you for all of your hard work!

Those were some really great photos!!!!!!!!!!!!!! Congratulations to all the winners!

Congratulations to the winners and all the participants! And thanks to Fin, Katie and Huffle for all their hard work!

I was so proud just to be worthy enough to enter ... but the BRONZE?!!? In the "naughty" cat-egory?!?! Oh, Huffs!!! I am so honored I could just burst! The competition was so incredible - you really put on a GREAT event! I tip my hat (well... metaphorically speaking) to ALL of my fellow competitors - and a hearty concatulations to the medalists!!!
Many, many thanks for all the work you put into hosting the event, Huffs! I thoroughly enjoyed it. I'm off to the sitzbank for a celebratory nap!
Play bows,
Zim

Those are certainly all medal worthy entries! Good choices Huffle and enjoy your well deserved day off!

Thank you everyone for voting for Shadow. He is now enjoying his favorite treats :). Congrats to all the winners. Everyone was fantastic!

I sent out the previous comment a bit too early. didn't get to finish typing my name :). Anyway have a relaxing Sunday everyone!

I competed! I got my badge and I'm out of here. NOT. I'm not that rude. :) Congrats to our winners! Huffle, you were a wonderful host and I had a terrific time participating and voting. Thank you very much for another great experience in blogland.
Twink!

YAY! I will have to inform Tuna of the news..she is sleeping now, not nearly as dramatic as she was for the competition, mind you. I will have to get her some of the finest soft food money can buy as a reward to go along with her medal. ;)
Congrats to all the other competitors...you are all winners!!
Thanks Huffle Mawson for hosting such a fun event. :D
Have a Great Rest of your Sunday.

Congratulations to all the winners. Some excellent choices, Huffle.

WOOT!!!!!!!!
Concats to all the winners!!!! That was a great selection . We giggled a lot,heeheehee
Purrs Mickey, Georgia & Tillie

I can not believe these incredible Kitty-Kats - We didn't know about the competition but we are thrilled to see all of these winners! We don't know how you managed to pick winners! They were all Awesome Just like YOU!
Purrs
Mama and the boys

Oh my goodness! We've been gone all day and just now saw the results of both People's Choice and medalists. Yay! Wow! Thank you so very much! Thank you to all who worked on this huge event, and congratulations to all the medalists!
~Lisa Co9T

Congrats to all the winners!!

I feel a bit sad that the games are over and the excitement has ended. It was certainly a great time and you and your mum did a super job in awarding the medals. And all the competitors were top notch! Thanks for putting on a great game! Can't wait until the next Cat-O-Lympics!

Well done every one! I don't know how you decided! So many great entries.

All fabulous winners of course! Lovely to see my very good friends Jack and Zim win too!!

Leave it to woo to pick a kitty who sleeps in a POT! tee-hee! :)

I can't help but notice you picked Siberians too... hmmm... do sibes and CATS have something in common? Oooo I think they do! it's called "INDEPENDENCE!" WOOO!

good job everybuddy! and i am especially impressed with HM for keeping all the entries straight, wowee, what a job.

Everyone did such a great job in the competition!
Congrats to all the winners!
--JB

That is some serious napping. I don't think I could sleep sitting up like that. I like to lay down. My mum and dad check to see if I died sometimes. They say no cat should sleep in that type of pose.

Woooos! Congrats to all of the winners and competitors! What a fun show this has been to watch, can we do it again next week?
-Kira The BeaWootiful

Congratulations to all the winners!! Paddy totally rules as the People's Choice winner, and Huff, you made some tough but fair choices for the other winners. Well done, madam!

purrs and hugs,
The Kitty Krew

Congrats to all contestants and to the winners!!!
Hugs,
Sitka

That was a fun contest Huffle. You and your mom did a fantastic job choosing the winners.
your pals, Morgan & Maisie