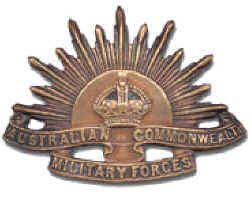 Australians recognise 25 April as an occasion of national commemoration. Commemorative services are held at dawn – the time of the original landing – across the nation. Later in the day, ex-servicemen and women meet and join in marches through the major cities and many smaller centres. Commemorative ceremonies are held at war memorials around the country. It is a day when Australians reflect on the many different meanings of war.
Written by Teddy Westlife at 7:52 AM

I guess Mom should choose an ANZAC wine for her Saturday night!

Will woo get pressies?

We salute you! Happy ANZAC day!

I just read about ANZAC Day on a Aussie Skywatch Friday post yesterday. It is so wonderful when people remember their heroes.

Thanks for that info. Happy ANZAC Day - too bad Mum didn't get the day off. Oh, wait, it's Saturday, isn't it?

Dad said that he got to study a little bit about the ANZAC forces when he went to military college. He say's it is supposed to be a happy holiday like Independence Day is here, but it's more of a rememberance day like Veterans Day or Memorial Day is here. We know that on Memorial day here everyone has picnics and barbeques, the government even made it so it always is on a Monday so everyone gets a long weekend off; at least they put Veterans Day back to Nov. 11 like Rememberance day in Canada. Dad says that when he was young on memorial Day there were military parades and people took flowers to cemetaries and were more thoughtful of what the day meant than they do know. We hope it hasn't totally gotten that way with ANZAC Day.
http://www.youtube.com/watch?v=6qiIG63WeJI
http://www.youtube.com/watch?v=2kX_3y3u5Uo&feature=related
- TBH

This is the first time that I have heard of ANZAC day. I hope that you got to celebrate with a special ham ceremony.

Happy ANZAC Day! Do woo celebrate with HAM?
We have something for woo on our blog- do drop by!

We think it is right and proper to remember heroes. So well done.

Thanks for voting for me. Smooches.

Thank you for taking the time the paws and reflect. It is a very special day.

Happy Anzac day, hope you have a good day and get to do fun things.

Oh Huffle, thankyou so much for your lovely comment about our daddy. We are glad to live in a country where everyone comes together to recognise the contributions that so many people make in so many ways. We are grateful to your grandad for his service:)

God bless those who fight to keep others free!
Great post, Huffs. Please stop by the blog - I've given you an award!
Play bows,
Zim

Sorry. Mom left her account up. That was ME!
Zim

Happy ANZAC Day! I never heard of it before so thank you for the information. I hope everyone had a nice celebration!

I also hope that there are no more human wars and that we all can live in Peace together!

Happy ANZAC day! I didn't know about it so thank for educating.